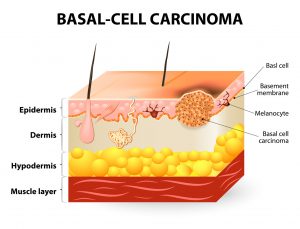 A Basal Cell Carcinoma or BCC arises from the basal layer of the epidermis of the skin. This is the most common skin cancer and accounts for about three quarters of skin cancers treated in Australia. Unlike other forms of cancer, it does not shed cells which travel to distant sites in the blood or lymphatic vessels. However, it can still be a very serious cancer, particularly in certain areas of the body, as it can grow down into and damage important structures in the tissues beneath it.

Most BCC’s occur on sun-exposed areas such as the face, although they can occur on less exposed areas too. They are usually pink or skin coloured, but occasionally can be brown. There are nodular and superficial BCC’s. Nodular BCC’s appear as a small lump, which is painless and occasionally ulcerates or bleeds. Superficial BCC’s look more like a flat scaly pink area. There are some rarer forms of Basal Cell Carcinoma that are much more serious and harder to diagnose.

If a person has had a BCC they have a higher chance of having another one in the future. This is true with all forms of skin cancer. Anyone who has had a skin cancer should be monitored for the rest of their life so that any further skin cancers can be diagnosed and treated early. As with all forms of cancer, early detection and early treatment provide the best chance of a full cure.